Members of the Anti-War Committee (AWC) will again submit to Boeing stock holders their resolution calling for transparency and accountability in their sales to Israel.

Last year, 5% of Boeing stock holders voted for the resolution. This 5% threshold earned the makers of the motion the right to have it submitted again at this year’s meeting.
According to the AWC, most people have no idea that Boeing is a major weapons contractor.
Boeing manufactures most of the components of bombs and missiles in a recent $2 billion sale of arms to Israel, including the guidance systems that turn regular bombs into “smart bombs.” A report by Amnesty International – UK showed that the bombings which caused the most casualties in Gaza in the 2014 Israeli assault came from Boeing’s laser guided, one ton bombs, the MK-84/GBU-31. Israel is purchasing 10,000 of these smart bomb kits.


Text of resolution and Board of Directors response: tinyurl.com/n4ka5an
Posted by joeiosbaker at 11:46 AM No comments: 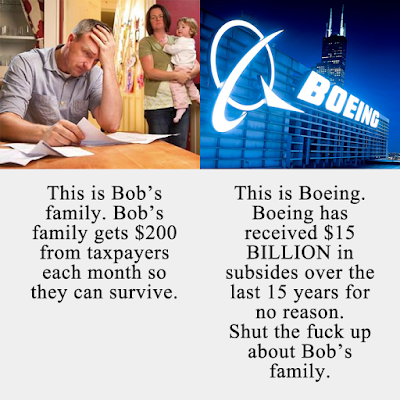 Posted by joeiosbaker at 1:49 PM No comments:

The Center for Constitutional Rights leapt to support those of us raided by the FBI and subpoenaed to a federal grand jury in 2010. Within a few months, Michael and Margaret Ratner Kunstler published "Hell No: Your Right to Dissent in Twenty-First-Century America," which put FBI repression in the post 9/11 world, but also the decades long - centuries long - history of the U.S. ruling class attacks on democratic rights. 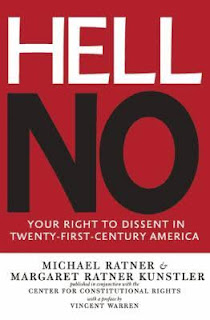 Posted by joeiosbaker at 6:47 PM No comments:

This morning, the Boeing Company held its annual stockholders meeting in Chicago. Members of the Anti-War Committee – Chicago (AWC) had submitted a resolution calling for the corporation to prepare a report detailing its arms sales to Israel, and when the votes were counted, Boeing’s board of directors reported that 5% of their stockholders voted in favor of the resolution. The directors stated that 88% of the stockholders had cast votes.

According to Kait McIntyre of the AWC, most people have no idea that Boeing is a major weapons contractor. “If the public knew how many weapons were being provided to the Israeli military for its wars on Gaza, opposition to the weapons sales would grow,” she said.

Israel recently completed its largest arms deal with the U.S., to purchase almost $2 billion in missiles, bombs, and guidance systems for bombs. Boeing manufactures most of the components of these, including the guidance systems that turn regular bombs into “smart bombs.” A report by Amnesty International – UK showed that the bombings which caused the most casualties in Gaza came from Boeing’s laser guided, one ton bombs, the MK-84/GBU-31. Israel is purchasing 10,000 of these smart bomb kits.

AWC has been active in solidarity with the Palestinian people since its founding in 2012. In 2014, three of its members—McIntyre, Newland Smith, and Joe Iosbaker—were among those arrested protesting Boeing Headquarters in Chicago during Operation Protective Edge, Israel’s devastating assault on Gaza that killed over 2100 Palestinians.

In the past several years, members of the AWC had purchased shares in the Boeing Company in order to bring a resolution before the stockholders, have been working with the Interfaith Council on Corporate Responsibility (ICCR). Sister Gwen Farry of ICCR and the 8th Day Center for Justice spoke in favor of the resolution during the company meeting.

On February 5th, 2016, the Securities and Exchange Commission overruled the directors.  The board continued to oppose the resolution. “Boeing then said this sale is controversial to a small number of individual shareholders. This is more evidence of the growing impact of the movement to Boycott, Divest and Sanction [BDS] Israel,” explained McIntyre.

Text of Boeing shareholder proposal and Board of Directors' Response
Posted by joeiosbaker at 2:56 PM No comments:

Text of Boeing Shareholder Proposal and Board of Directors' Response 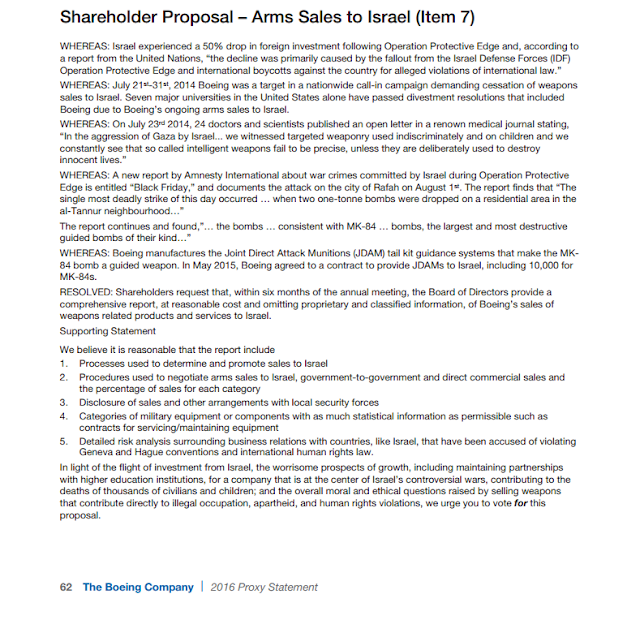 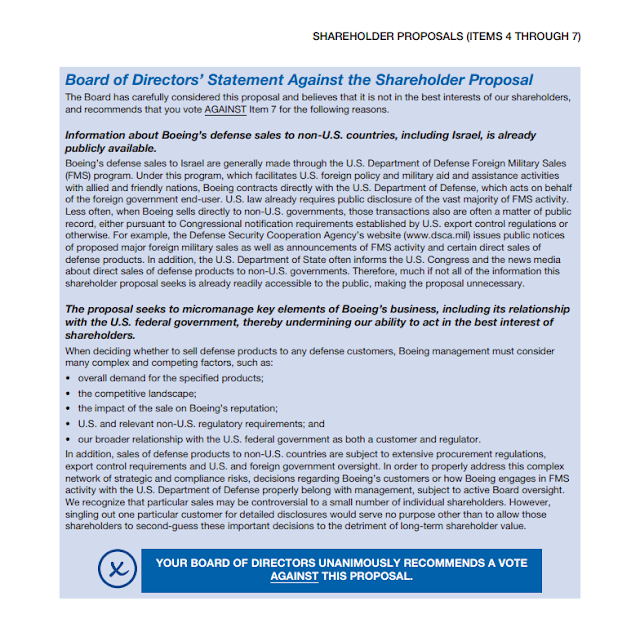 Posted by joeiosbaker at 2:54 PM No comments:

On May 2, 2016, five Boeing Company shareholders will attend the annual meeting to vote for and speak in support of a resolution which will require that the corporation prepare a report detailing its arms sales to Israel.

The sponsoring shareholders and supporting community organizations will come together to demonstrate public support for transparency and accountability from Boeing Company.  Sarah Simmons of the Anti-War Committee, and a Boeing shareholder, stated, “Our goal is to prevent shareholders from being unwitting collaborators in human rights' and international law violations committed with weapons Boeing has manufactured and sold to Israel.”

Simmons added, “Given that Boeing enjoys significant tax advantages here in Chicago, and that its stock is widely held in pension funds here and elsewhere, this is an issue that is of concern to all Chicagoans.” 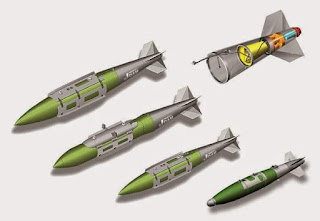 Join us for our protest at Boeing's shareholder meeting.


Members of the Antiwar Committee Chicago crafted a shareholders' proposal demanding transparency regarding Boeing's weapons sales to Israel. Boeing initially denied the proposal but the Securities and Exchange Commission forced Boeing to include it in the agenda and put it to a vote by shareholders. Together with other peace groups, the activists will hold a press conference to oppose the Boeing Company selling weapons to the Israeli Defense Forces. Those AWC members who are also shareholders, Newland Smith, Joe Iosbaker, Richard Berg, Sarah Simmons, and Kait McIntyre, will attend the annual meeting of the Boeing stock holders to argue in favor of their proposal to the other shareholders and board.

Joining us will be the 8th Day Center for Justice; U.S. Palestinian Community Network; and the International Campaign for Human Rights in the Philippines. Our special guests will include a delegation of indigenous Lumad people from Mindanao in the Southern Philippines, who are victims of human rights violations from the U.S. war on terror.


Check out the Facebook event
Posted by AWCC at 9:50 AM No comments:

The next meeting of the Antiwar Committee Chicago is on Sunday, June 5 at 4:00 pm. For conference call details, contact kait.mcintyre@gmail.com

Read the No War on Syria Resolution from AFSCME Local 2858